In the late 1980s, digital technology began to enter the key systems market. Toshiba’s first digital key telephone system was the Strata DK in 1989. The DK56 and DK96 replaced the XIIe and Xxe in the Strata product line and set the standard architecture for our current digital product line.

Strata DK Release 2 brought many important enhancements to the DK56 and DK96 systems in 1990. At that same time, Toshiba also introduced the DK24, bringing digital technology farther down the size range of the Strata product line. The DK24 also filled an important need for a system sized between the 6×16 Strata VIe and the Strata DK56.

In November 1992, Toshiba introduced one of the most exciting Strata products to hit the hybrid/key systems marketplace in some time – the DK16. The DK16 replaced the Strata VIe in the Strata product line, bringing digital technology to small system users. With all the features and capabilities of larger Strata DK systems, the DK16 provided sophisticated functionality rarely found in a small hybrid/key system.

The Strata DK8 followed closely behind the DK16 in time, completing the transition of the entire Strata product line to digital technology from end to end. With its introduction in April 1993, the DK8 replaced the Se in the Strata product line, bringing powerful features, rarely found in systems of this size, too small system users.

In June 1993, Toshiba introduced another milestone product to the hybrid/key systems marketplace–the Strata DK280 Modular Digital Telephone System. The DK280 replaced the DK24, DK56, and DK96 in the Strata product line. This important new product provided many advanced new features, significantly expanded the size of Strata systems, and made modular growth and migration more cost-effective than ever before.

In 1996, Toshiba introduced the Release 3.0 version of the Strata DK280. Release 3.0 provided Multiple DNs, Caller ID/ANI, DNIS, and other important advanced hybrid features. At the same time, Computer Telephony Integration TAPI capabilities became available for all Strata DK systems, opening the door to many exciting new custom PC-driven applications. Later in the year, the DK16e replace the DK16 adding Caller ID and many new enhancements. Also in 1996, the digital Cordless Telephone was introduced. 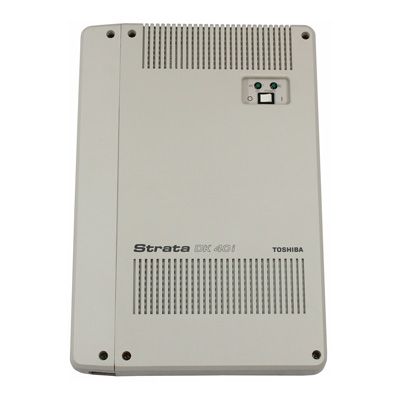